Read more: http://www.theage.com.au/victoria/hastings-port-expansion-to-overburden-melbournes-roads-and-rail-lines-report-finds-20140708-zt0i5.html#ixzz42Y8bKxHq
Follow us: @theage on Twitter | theageAustralia on Facebook
A plan to develop a huge container port at Hastings south-east of Melbourne could put an impossible strain on the city’s roads and busiest rail lines and potentially drive up the cost of imports and exports, an independent report says.
Land in wealthy, “leafy green” suburbs including Malvern, Armadale, Toorak and South Yarra would also have to be excavated under the plan to build a new freight rail line to the Tottenham rail yards in the western suburbs.
The Napthine government’s long-term plan to vastly expand the Port of Hastings to handle 9 million shipping containers a year risks forcing 1.5 million B-Double trucks or 50,000 freight trains to travel across the city annually, the report by Victoria University’s Institute for Supply Chain and Logistics contends.
“Given the current road and rail infrastructure and distribution of import/export containers, more than 70 per cent of all containers would have to work their way through the Melbourne metropolitan area to reach Hastings,” the institute’s Hermione Parsons and Peter van Duyn write in the report, to be launched by the Committee for Wyndham on Wednesday.
This journey of up to 100 kilometres would add to the transport costs of freight and logistics companies, pushing up prices for consumers because of the added distance, the report argues.
It notes that a 2009 study found that about half of all import and export containers passing through the Port of Melbourne “originated in or were destined for the crescent of industrial land located on both sides of the Western Ring Road between Altona and Laverton in the west and Hume in the north”.
The report reaches the clear conclusion that Labor’s Bay West policy to investigate building a new port between Geelong and Werribee should be put back on the table after the Napthine government ruled it out last year.
“Governments have stated the crucial reason for the development of the Port of Hastings is that a deep water port is needed to cater for much larger ships with a draught of 16 metres. In 2014 however, many industry experts suggest these mega ships may not come to Australia and Victoria,” the report states.
David Hodgett, the Minister for Ports, said Melbourne risked becoming a backwater port to Sydney and Brisbane if it could not cater for larger ships.
"All the advice that I have received from shipping lines, fleet forecasters, stevedores, government departments and the majority of people in the industry, is that larger ships will be coming to Australia and we must ensure that Victoria will not be left behind,” Mr Hodgett said.
He said ships carrying between 8000 and 18,000 containers could be expected to call at Australian ports by 2030.
A well-placed source from the state bureaucracy said both Bay West and Hastings would cost several billion dollars, require significant dredging and carry large environmental risks.
A detailed comparison of both projects shows Hastings would likely cost between $7 billion and $8 billion, while the Bay West option would likely cost between $5 billion and $7 billion for dredging, land reclamation and construction. According to the assessment, the additional travel time to move goods to and from Hastings could cost as much as $400 per container.
The source said Hastings would mean at least an extra 50 to 70 kilometres on every freight movement.
Although Hastings is often called a natural deep water port, significant dredging would still be required, with the channel just six metres deep in some places. That means between 25 and 50 million cubic metres of dredging would be needed. According to the source, the amount of dredging at Hastings may not be significantly less than Bay West.
The source said it would also be easier and cheaper to provide transport links to Bay West, with the Hastings plan requiring a staged upgrade of Western Port highway and a new rail connection via the Dandenong rail corridor.
Labor has promised a new major projects adviser, Infrastructure Victoria, will investigate Bay West as an option for an alternative port. Although it appears to strongly favour the idea of locating a new port in the west, the opposition has yet to fully commit to the idea.

In the Port of Hastings Strategic Land Use and Transport Access Corridor Planning Study- Community Reference Group- Options Briefing Dept of Infrastructure, Port of Hastings and Maunsell. Oct 2005 Deepening of the Channel is mentioned:….."Likely Vessel Requirements….Existing Channel depth 14.3metres at lowest tide (zero tide). Tidal assistance will be required at times to allow large vessels access to the Port of Hastings- a scheduling constraint. Deepening of Channel [from 14.3m] to 16m would provide greater flexibility". The channel is a long way from the proposed wharf and would require  dredging and significant dredging has been proposed just to establish the wharf. Drawings from pg. 10 to 14 show areas of 1.5kms to more than 4kms long, and 600m to 750m wide hatched to depict potential dredging areas. In addition to this there is an 800m basin hatched into seagrass flats for Dry Bulk.  Dredging  affects the immediate environment which suffers short and long-term affects. This is especially ill-advised with significant vegetation such as mangroves, salt marsh and seagrass. Dredging will create Suspended sediments which provide nutrients, otherwise settled, to stimulate algae growth. Epiphytal algae grows on seagrass and kills it. Suspended sediments block the light and smother seagrass and other life. Our Seagrass species, like plants on land are vital to provide many ecological functions. Unlike plants on land if these few species of seagrass dies there is nothing (like weeds) that can replace them. The Bay's health is linked to the health of the seagrass. Which keep animals alive that live in the sediment. It is not just a matter of losing a few species. The Bay could Eutrophy.

Tidal movement. The water moves on each tide a distance of 10 to 20 kilometres and, over weeks circulates around French Island - a giant washing machine. The inevitable polluting effects of port development and port operation - oil spills, introduced marine pests, as well as the ever-necessary dredging - are not therefore confined to the port area: a pollution event anywhere in the bay would in a short time affect the whole bay.

The bay is host to thousands of marine species, a breeding ground for ocean fish. Recreational Fishing is a big industry in the Westernport Bay area.  Tourism, largely for Melbourne, is a real cornerstone of the economy for this region and relies on a healthy Bay. The Penguin Colony on Phillip Island is Victoria's most valuable tourist attraction. Recreation on safe beaches is a vital part of the Health of Melbourne's people. We expect that a full and detailed environmental impact assessment be carried out on a completed 3-stage project before any start is made on stage 1.The alternative solution should be a National Transport Plan. This should probably involve port rationalisation and invest in rail transport. 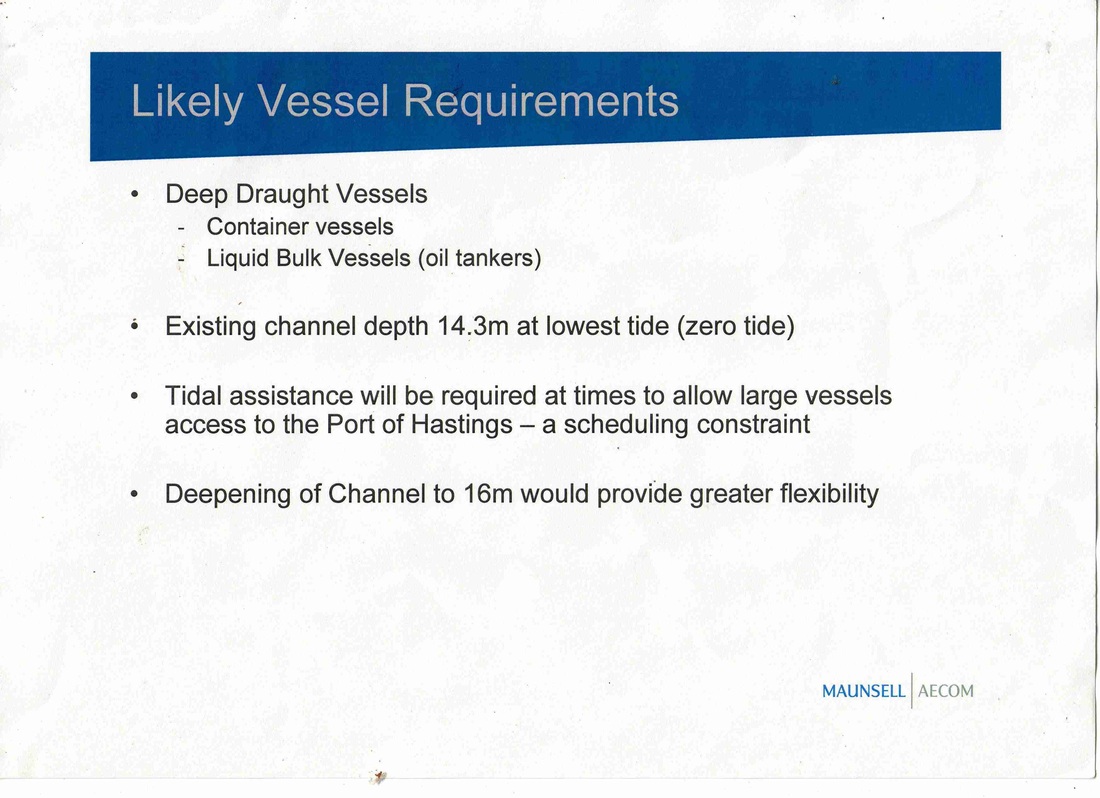