Westernport and Peninsula Protection Council has a Proud 50 year history

​Westernport’s passionate protectors – 50 years and still going strong!
As we celebrate our 50th year, we’ve put together a timeline of WPPC activities. We reflect on, thank, and acknowledge the committed people, past, present, who contributed to WPPC’s legacy. These allies include passionate community members, state-wide, national, and international environmental organisations, universities, scientists, artists, and our members who are concerned to care for and promote Westernport and surrounds as an integrated, protected biosphere.
There have been many proposals including an aluminium smelter, ammonia-based fertiliser plant, and even a nuclear power plant on French Island. As long as land is zoned port-related and the myth of Westernport as a natural deep-water port, Westernport will continue to be subject to these kinds of threats.  WPPC and our allies will continue to fight them.
1973   The Shapiro Study of Westernport Bay was commissioned under Dick Hamer’s Government, raising concern about a seagrass die-off. ‘A preliminary report on the Westernport Bay environmental study: report for the period 1973-1974’, Maurice A. Shapiro. Victoria. Ministry for Conservation.
1977–79 Proposed Gas Turbine Power Station, Tyabb, Devil Bend Airport - major freight and business jet airport, IPEC Tigers - proposed freight terminal – all abandoned.
1979   WPPC requested Dr Brian Cuming’s assistance as a chemical engineer, and he immediately became involved in hearings of the House of Representatives Oil Spills enquiry.
1980s
1986 - Green’s Bush – WPPC joined a coalition of ecologists and community, to prevent subdivision and establish a nature reserve
1987 Artist Ian Cuming approached WPPC for $300 to make giant puppets representing marine life in the bay. This grew into The Seagrass event, using over $110,000 grant money from local, State and Federal Government through 1988-90. WPPC was deeply involved, with local community and hundreds of school children.  So to was Prue Griffith, and Rosey Buchanan, (WPPC) subsequently became a local councillor and MP respectively.
WPPC gave a small environmental award to a Westernport College student every year until the 2000s
1987 - Proposed Western Mining ammonia-urea plant was stopped.
1990
1991 Seagrass story, 1991 https://www.youtube.com/watch?v=b3Ov6eS5170 , Ian Cuming
1993 WPPC’s Prue Griffiths submission on oil spill accidents
1994-1997 Shell/Mobil proposal for ‘supertankers’ to ship crude oil terminal at Woolleys Beach.
1995 - Oil in Westernport Position Statement written by Brian Cuming, President WPPC after lengthy research by the committee, including a requirement for EES re large scale oil imports through Crib Point.
1996
1999 WPPC advised through its networks that Melbourne Water would decommission Bittern and Devilbend Reservoirs in 2001, with a proposal to effectively sell off half the land for subdivision. Snez Plunkett, (WPPC) Shire Councillor, was actively involved in highlighting the issue and spent 3 years on Melbourne Water’s Devilbend community consultative committee.
2000s
The beginning of a seventeen-year campaign against a container port in Westernport Bay. WPPC wrote a submission on the Victorian Ports Strategic Study.
Mangroves and Saltmarsh at The Bluff were bulldozed, and the Bond family were fined.
2002 Marine National Parks Proclaimed including French Island, Yaringa and Churchill Island in Westernport
2003 ‘The Community Vision for Devilbend’ is launched by WPPC Inc. at a Public Meeting hosted by WPPC 28th May at Moorooduc Hall. Unanimous vote to keep it in public hands. A winter solstice gathering at Devilbend was then held, involving WPPC, as was a spring picnic at Devilbend.
2005 The Devilbend Steering Group was formed, with 40 groups
2006 Devilbend announcement – 100% of Devilbend / Bittern reservoirs set aside for community parkland, for passive recreation and nature conservation!!
For many years WPPC presented an Environmental Scholarship to Westernport Secondary College.
2009 - Boral Construction Materials proposes to construct a bitumen storage facility and associated infrastructure at Crib Point. Initially approved by the Victorian Minister for Planning. WPPC supported Crib Pt action Group, Neale Burgess and others in overturning this decision.
2010s
2011 –Baillieu government announced expansion of Port of Hastings, catapulting WPPC and allies into busy campaigning
2013- Oil Spill modelling updated for VNPA and WPPC
2014
2015

WPPC inc initiated the protection of Devilbend, ( Daargean)........ and won! 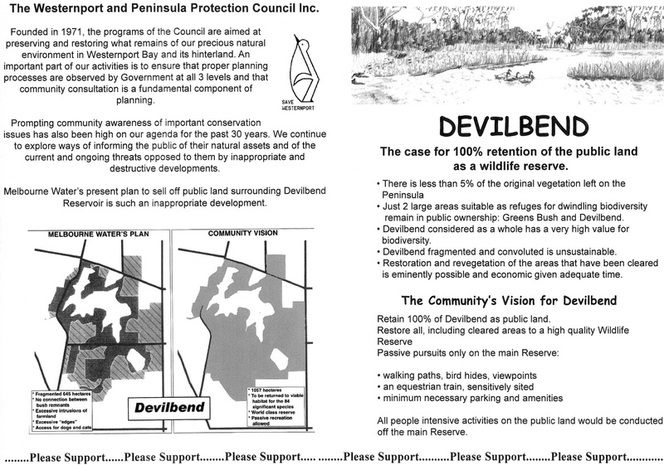 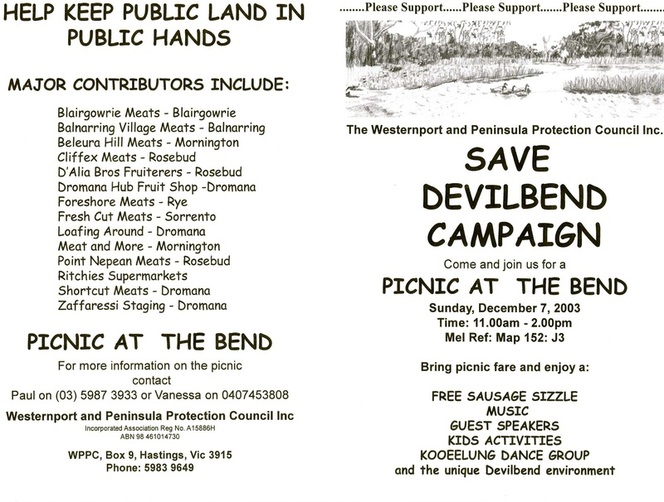 •         In Dec 30th 1970 there was a protest rally against the Ampol-Sleigh proposed refinery at Bittern, 600 people attended a meeting on Balnarring Race Track.

•         We have approximately 300 members
Our Principle Objectives are

To engage in, support and promote:

•         conservation of natural resources, including fauna and flora

…of Westernport, the Mornington Peninsula and elsewhere.
In 1987 WPPC Inc. were the leading group in the successful campaign against The Western Mining Corporation Ammonia–Urea plant proposal on the  BP site using the Crib Point Jetty.   Later a key campaigner in that campaign, Rosy Buchanan became president of our group.
1992 Super tanker proposal for same BP site. Shell-Mobil bought it for a major oil import facility. Again an angry public put evidence on the table including the Shapiro report. We were key campaigners  again in this campaign and in due course the Shell company advised our President Dr Brian Cuming,  in a personal call from the Head Quarters in Holland that the plan was to be shelved indefinitely.

From there  there was bipartisan support for a statement from  the minister for planning Tom Roper that  it was inappropriate for such an industry to develop there, and secoundly that a policy should be adopted which later became enshrined below….
We participated in government planning via The Westernport Regional Planning and Co-ordination Committee. The main planning change as a result of that same campaign was Document 1 below. Which we saw as a victory and we have never forgotten, and we will never forget, because there is so much sense to it.
Another effort which WPPC initiated and were deeply involved in the three years 1988, 1989 and 1990 were the three Seagrass festivals which involved large puppets, hundreds of school children and massive community participation to celebrate the environmental values of Westernport Bay 1990.

Dr Brian Cuming Past President and research fellow of WPPC Inc,40 years resident of Bittern “I have always had great faith that the Hastings, Crib Point, Stony Point area would become a thriving residential area with  great lifestyle facilities.  Providing recreation for the region.

In the last ten years this has really happened. Pelican Park,  and the Petersen Bookshop symbolizes modern Hastings/Crib point,

Let us not spoil it with corruptions”

to top of page
to home
to next page