Form letter to print out about Kawasaki's Hydrogen export plans
​

Westernport community volunteer environment groups are in the process of applying for grants for marine pest monitoring in Westernport Bay. In a separate effort, eight environmental groups have requested monitoring as part of the Kawasaki Coal to Hydrogen Export Trial. The trial costs $500 million dollars but marine pest monitoring has been refused. Please can you demand that some of that money be spent on marine pest monitoring? We don’t want DEWLP to shoulder the costs, as too many cuts have happened in the biodiversity area over decades.
Westernport Bay currently has no known infestations of Northern Pacific Seastar and Japanese Kelp and we do not want to see empty ships from Japan full of ballast water enter Westernport Bay. While ballast water is exchanged at sea, if one seastar remains in the hull it can produce thousands of larvae. Japanese woodchip ships and has been partially responsible for the decimating of fish stocks in Port Phillip Bay. These starfish after decades, are adapting to our warmer waters and are moving out from the deepest water, and carpeting the bottom near shore. We request the trial site is monitored for years for marine pests. We trust no full-blown project is likely due to its lack of a business case.Kawasaki, J Power and Iwatani have proposed to export hydrogen gas from Hastings made from Loy Yang’s brown coal. This involves: partially burning brown coal at Loy Yang, using water to scrub the CO2, CO, SO2, SO3, and CH4 produced out of the emissions and pumping it underground after finding a location and method of sequestrating first, trucking of hydrogen gas to Hastings, converting it to liquid in a new plant by freezing to below -2500C, shipping it to Japan and converting it back to gas in Japan. This has been credibly ridiculed.
The trial is costing $50 million dollars each from both your State government and the Federal government. It is another subsidy for the coal industry. Latrobe Valley deserves a sustainable job creation boost, not one that is likely to be another failed project.     Westernport Bay is worth billions every year in its healthy state, and is too precious to lose.We urge you, Hon Lily D’ Ambrosio to demand marine pest monitoring in Westernport Bay out of the Coal to Hydrogen Trial’s existing budget.

The Federal and State Government’s announcement that hydrogen would be shipped from the Port of Hastings to Japan is unwelcome. Four industrial processes, two journeys and the wrecking of Westernport Bay by dredging and marine pests, makes this hydrogen power source for Japan definitely not clean or green. The full-blown project is unconscionable and the therefore the trial is redundant.
Kawasaki, J Power and Iwatani have proposed to export hydrogen gas from Hastings made from Loy Yang’s brown coal. This involves: partially burning brown coal at Loy Yang, pumping  dirtied water used to scrub the CO2, CO, SO2, SO3 out of the emissions underground, after  finding a location and method, trucking of gas to Hastings, converting it to liquid in a new plant by freezing to below -250 degrees, building a new port to export it including massive dredging of 23 million cubic metres, shipping it to Japan and converting it back to gas in Japan.
Marine Pests would kill fish stocks.Westernport Bay currently does not have Northern Pacific Seastar and Spartina and we do not want to see empty ships from Japan full of ballast water enter Westernport Bay. While ballast water is exchanged at sea, if one seastar remains in the hull it can produce thousands of larvae. The proposed trial threatens to bring in pests. We demand the site is monitored for years for marine pests, if a trial goes ahead and no full-blown project is begun.Dredging would kill life in Westernport Bay.
The gas ships for the long-term proposal are of deep draught (GHD 2017) like container ships. Infrastructure Victoria ruled out Westernport Bay as an option for a container port because it would take 23 million cubic metres of dredging to build a container port at Hastings; he same amount as the channel deepening in Port Phillip Bay. Westernport’s capacity is more than ten times smaller than Port Phillip Bay’s and its seagrass could not grow to the new depths required, leading to ongoing turbidity and death. Hastings cannot be a port for ships with deep draughts.
This project is a waste of money.Westernport Bay is worth billions every year in its healthy state, and is too precious to lose.Latrobe Valley deserves a sustainable job creation boost, not one that is likely to be another failed project.Our governments should suspend the spending of 100 million dollars on the trial because the full-blown project is too damaging, expensive and inefficient to consider going ahead with, and therefore the trial is redundant and not worth the threat of introducing marine pests.
The Premier
The Hon. Daniel Andrews MP

To Hon. Daniel Andrews MP,
​
I urge you to drop any plans to export brown coal out of Hastings.
I congratulate Labour for dropping funding for one of three dirty coal export projects to the tune of 25 million taxpayer dollars! Shanghai Electric planned to turn dirty Victorian brown coal into briquettes and then export them to China to fuel a power station in Shanghai. This is now not happening!
Three reasons not to export brown coal:
-   Climate Change
-   Economic costs: - low value product, lots of infrastructure, threat to tourism.
-   Environmental costs of building a port.
The dredging alone would be enough to ruin Westernport Bay; Victoria University estimates it would be between 20 million and 50 million cubic metres. The famous Channel Deepening dredging amounted to just 23 million cubic metres.
Westernport would not handle this level of disturbance. Dredging the mud flats would stir up silt and result in seagrass deaths and with our strong tides would cause further erosion.

The AGE 2nd September please respond to this article

Phillip Island's famous fairy penguins and other precious wildlife in Western Port would face serious threat from an oil spill at the Port of Hastings - set to become Australia's next major container dock under state government plans.

In scenarios involving a spill of 200 metric tonnes of heavy fuel oil, it was found over 80 per cent would wash up on shore around Western Port, Phillip Island and French Island, over a period of a few days to a few weeks.


The first traces of oil could reach some local shore lines within minutes.

The Napthine government has committed $110 million for design and planning work towards expansion of the Port of Hastings.


The government is pursuing a new port because a six-fold surge in container trade is expected by 2050 and the Port of Melbourne will reach capacity about 2027.

The oil spill modelling analysed six different scenarios based on location, season, and what type and how much fuel is released.

It was not based on an oil tanker spill, rather heavy transport oil and diesel used as fuel in container ships and support vessels. The work - backed by on water tests - did not consider the likelihood of a spill occuring in Western Port, or the environmental damage. Australia has had 27 oil spills from shipping in the last 43 years.


Despite a history of industry in some areas, Western Port is internationally recognised for its spectacular natural values. The bay is protected under the Ramsar Convention, the international wetland treaty. Three marine parks, a national park and other conservation areas are in or around the bay.

Western Port is home to 1350 marine species, including one of Victoria's state emblems - the weedy seadragon.

''The spill modelling indicated that oil spilled under any of the spill scenarios has a high probability of spreading widely throughout the estuary system,'' the report says.

Conservationists are calling for a full public inquiry, under national environment law, into the risks posed by increased shipping and potential dredging to expand the port.

The modelling was commissioned by the Victorian National Parks Association and the Western Port and Peninsula Protection Council.

A state government spokesman said the green group's claims were unnecessarily alarmist given Hastings had operated as a commercial port for nearly two centuries and had handled crude oil since 1970 without incident.

Coalition environment spokesman and member for Flinders, Greg Hunt said: ''Any possible project is some years away. Every party has agreed that the pre-requisite would be a full environmental impact statement.'' 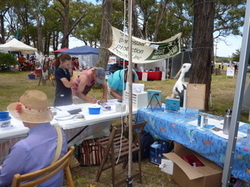 Hello
help us save Westernport Bay by writing a letter. Download and send to the politician's address at the top of the page or write your own and don't forget to send email a copy to us on wppcweb@gmail.com.